We specialize in top quality teas from Japan, and around the world.

We also serve a variety of very typical Japanese food items whether you're looking for a quick snack or a satisfying meal. 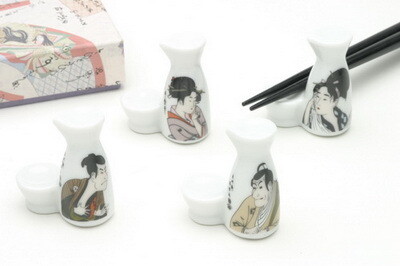 Set of four (4) chopsticks rests in the shape of sake cup and serving bottle. A different Japanese classic painting on each rest, and cased in a beautiful box.

Tōshūsai Sharaku (Japanese: 東洲斎 写楽; active 1794–1795) was a Japanese ukiyo-e print designer, known for his portraits of kabuki actors. Neither his true name nor the dates of his birth or death are known. His active career as a woodblock artist spanned ten months; his prolific work met disapproval and his output came to an end as suddenly and mysteriously as it had begun. His work has come to be considered some of the greatest in the ukiyo-e genre.

Sharaku made mostly yakusha-e portraits of kabuki actors. His compositions emphasize poses of dynamism and energy, and display a realism unusual for prints of the time—contemporaries such as Utamaro represented their subjects with an idealized beauty, while Sharaku did not shy from showing unflattering details. This was not to the tastes of the public, and the enigmatic artist's production ceased in the first month of 1795. His mastery of the medium with no apparent apprenticeship has drawn much speculation, and researchers have long tried to discover his true identity—amongst the dozens of proposals, some suggest he was an obscure poet, others a Noh actor, or even the ukiyo-e master Hokusai.

Kitagawa Utamaro (Japanese: 喜多川 歌麿; c. 1753 – 31 October 1806) was a Japanese artist. He is one of the most highly regarded designers of ukiyo-e woodblock prints and paintings, and is best known for his bijin ōkubi-e "large-headed pictures of beautiful women" of the 1790s. He also produced nature studies, particularly illustrated books of insects.

Little is known of Utamaro's life. His work began to appear in the 1770s, and he rose to prominence in the early 1790s with his portraits of beauties with exaggerated, elongated features. He produced over 2000 known prints and was one of the few ukiyo-e artists to achieve fame throughout Japan in his lifetime. In 1804 he was arrested and manacled for fifty days for making illegal prints depicting the 16th-century military ruler Toyotomi Hideyoshi, and died two years later.

Utamaro's work reached Europe in the mid-nineteenth century, where it was very popular, enjoying particular acclaim in France. He influenced the European Impressionists, particularly with his use of partial views and his emphasis on light and shade, which they imitated. The reference to the "Japanese influence" among these artists often refers to the work of Utamaro.

Save this product for later
Display prices in: USD

We are located at the back of Parking Lot D off of Hamilton Street. We can NOT be reached via Merryman Street regardless of what Google Maps may tell you!

Please Turn on to Hamilton Street, then into the main parking area. Then turn into the parking aisleway on the right and proceed to the rear of the lot. You'll find us nestled between La Palapa and the CentreTek building.